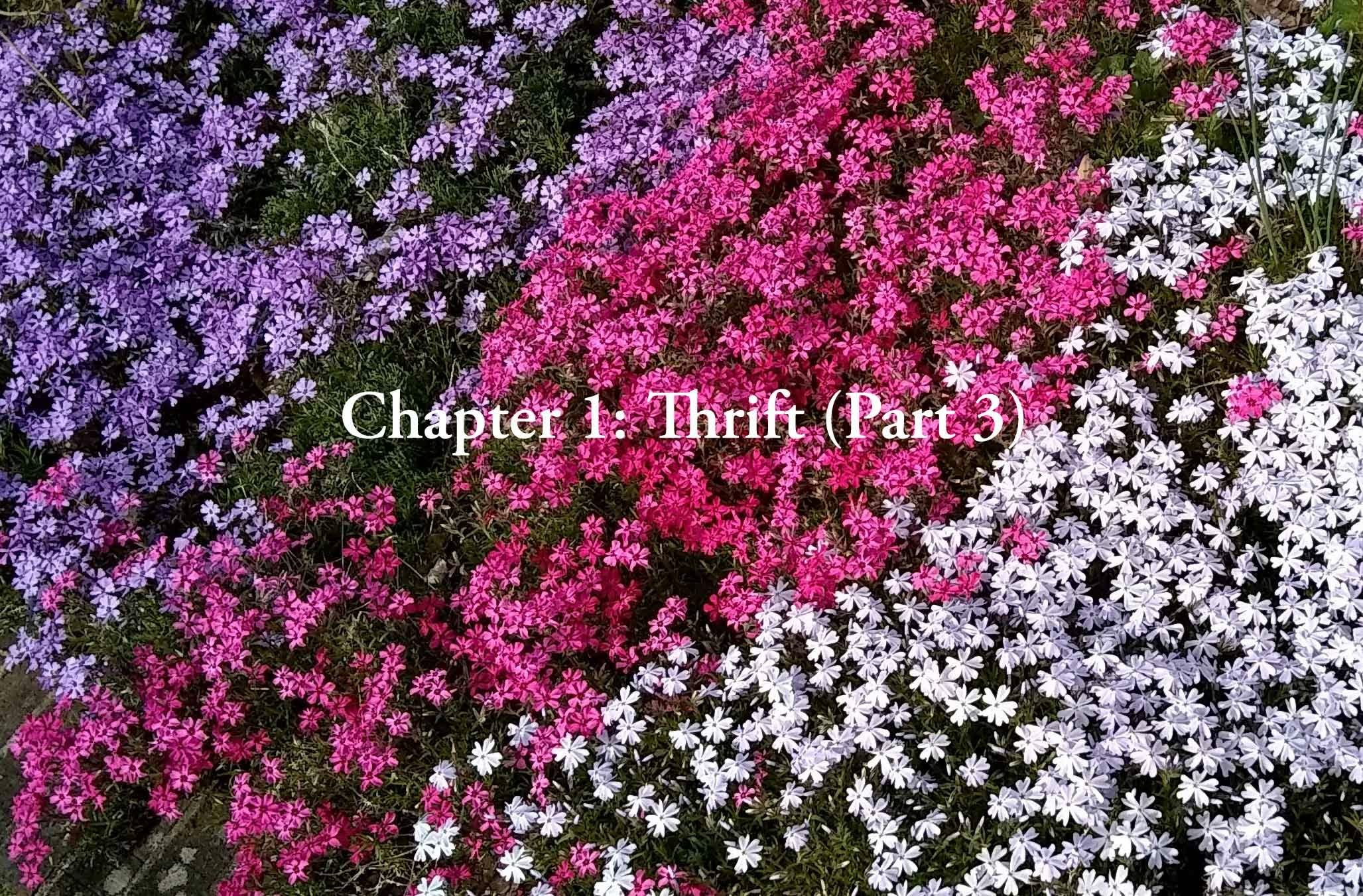 BOONE, N.C. (Aug. 18, 2019) — Thrift always reminds me of the woman who made me want to tell stories—thrift the flower, not the prudent use of money.

If she were alive today, Grandmother Duckworth would get a laugh out of that sentence, not because I’m giving her credit for inspiring me to be a writer, but because, in her country way of saying things, “telling stories” meant you were telling lies.

One summer when I lived with her, she asked me more than once if I was “telling [her] a story” about where I’d been or whom I’d been with after I’d gotten home late from work. “Honest, Grandmother,” I’d say, “I wasn’t with anybody. I stopped at Western Piedmont to shoot some basketball—by myself.”

Her little white house in the Hopewell community about eight miles from town had been built by her husband, my granddad, around 1920, a few years after they married. He later added two bedrooms to accommodate them and the four children who grew up there—my uncles, aunt and mom—and even later added a new kitchen, screened-in back porch and bathroom. In addition, he built a combination woodshed and granary, two small, block outbuildings for chicken coops, and a large barn.

Because part of the house sat below a red-dirt driveway and two good-sized garden plots next to the woods, Granddad had terraced the front yard to divert water runoff in heavy rainstorms, I’m guessing. All those terraces were divided by boxwoods with their pungent cat-pee smells, flowerbeds and rock gardens featuring pink, blue and white thrift. Granddad had also poured his own cement birdbaths—decorated with sea shells and small porcelain animals—and had placed them around the yard.

But he never got around to putting up a basketball backboard and goal at the house, at least not that I remember. That’s why I always stopped at the WPCC courts that summer. I loved to play basketball, whether joining others in a pickup game or just dribbling and shooting by myself.

Granddad, on the other hand, had been a baseball player—a star pitcher, Grandmother said, who had been offered a scholarship by some rich man in town, an old doctor maybe, to play baseball for the University of North Carolina, but he had turned it down to marry her. She said he could throw a rock and knock a chicken’s head off from across the driveway. She wasn’t just telling stories, because I’d seen her ring a hen’s neck and pluck it next to the woods, then cut it up in the kitchen and fix it for Sunday dinner. At the Duckworth house, chickens crossed the road at their own peril.

Granddad died in 1965. Grandmother, who died in 1992, never remarried. As far as I know, she never even came close to allowing any old gentlemen to call on her at any point in those 27 years, but I’m guessing that some of them tried. That’s not something, though, that a grandmother would discuss with her eight-year-old grandson who had been dropped off to spend the weekend with her in 1967 to keep her company—or even with her 18-year-old grandson who was spending the summer of 1977 with her while his parents made road trips to visit family and friends in other parts of the country. It was their effort to reconnect, I think, after the death of my little brother six months earlier. I guess it worked for them.

Whatever my age, I also loved listening to Grandmother’s stories. She must have gotten tired of telling some of them—all the ghost stories dealing with her father, who had been born “with a veil” and could see dead people; the childhood tale of growing up on a share-cropper farm in the southern Piedmont when the plantation owner’s daughter drowned herself after being jilted on her wedding day, a story I’ve verified through online research; Grandmother’s recounting of the summer of 1927 when Burke County was terrorized, she said, by a man who had killed a girl in Morganton and then evaded capture for two weeks before being shot near Linville Falls; and many other stories about everything under the sun, but usually involving odd or interesting experiences of family members.

Most of the time, Grandmother would tell me these stories on Saturday mornings as I sat at the kitchen table and she stood over her wood cookstove to fix me fried eggs, livermush, gravy, and flapjacks—not pancakes, but a kind of fried and folded sweet bread—and then she’d give me a cold glass of whole milk that one of her neighbors across the ridge had sold her straight from his cow.

I owe Grandmother a debt, not just for feeding me all those breakfasts (and chicken dinners), but for feeding my young imagination with her stories and for daring to entertain me with only those spoken words. She didn’t sit me in front of the TV and tell me to leave her alone. Each of the 11 novels I’ve written contains something that I first heard in one of her stories. In fact, my first novel was based almost entirely on her dark tale of the jilted lover, though I changed the characters and setting.

At the same time, Grandmother wasn’t perfect. She had her favorites among all of us grandchildren, and she didn’t hesitate to say so. She fed me and told me stories, but I wasn’t one of her favorites. Still, on my birthday she’d send me a card that contained a stick of gum and a dollar bill. That was quite all right with me then, and the memory is more than OK with me now.

I turned 60 today. It being Sunday, I didn’t get any cards in the mail. But I haven’t forgotten all those stories Grandmother used to tell me. I can still see her in the kitchen and still taste the food from that magic cast-iron skillet on her old cookstove. I can even see myself seated at her table, looking out her kitchen window as she talks and helps me imagine what it would be like to see dead people.

It doesn’t take much now. The smell of boxwood. The sight of thrift.